A long time ago in a galaxy far far away....

I have always loved Star Wars.  I have fond memories as a child watching the "original" trilogy on VHS.  Not 3 VHS tapes, all three on just one tape.  I don't know how my mom did it, I sense the dark side influence, but she managed to copy all three movies onto one tape.  The quality was crap, but I watched those movies, along with Indiana Jones, over and over, and I loved it!  I even remember watching the Ewok movies eating my C-3PO cereal.  When Episodes IV-VI came out on video again, I bought them and could not believe all the things I was missing on my original copy!  I watched all the other movies when they came out, liked some, didn't like others. Played most if not all the computer/console games that were released and was a diehard fan of the Dark Horse comics.  Then Rouge One came out.  I loved the feel of that movie.  It also reminded me that I have always wanted to game Star Wars.  I have some of the old West End Games 25mm figures that I made an aborted attempt to paint. I even have the rules, but I never gamed with them.

When Wizards of the Coast released their plastic figures I was super excited, until I saw some of them.  Super deformed, less than good paintjobs, and random packages.  They were not my thing at the time.  After watching The Clone Wars, Rebels, Solo, and the Mandalorian, I wanted to game Star Wars more than ever.  But the real question was what time period?  The Clone Wars? The Empire/Rebels? The First Order/Resistance?  I looked at the Imperial Assault game.  I wasn't interested in the rules but the figures looked awesome, but the Stormtroopers were monopose.  Then there was Legion.  Awesome figures but the wrong scale for me.  I mainly paint 28mm.  I eventually went with Legion.  Not too keen on the rules but the figures are super nice, plus all the after market resin figures!

While I was looking at some resin figures I saw some for a time period that I forgot about, the time of the "Old" Republic.  I loved the RPG The Knights of the Old Republic and The Old Republic.  The Idea of a bunch of Sith knights fighting Jedi had always appealed to me.  I just love these pictures. 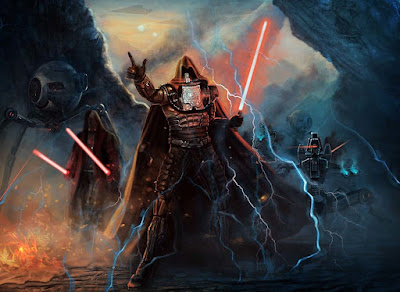 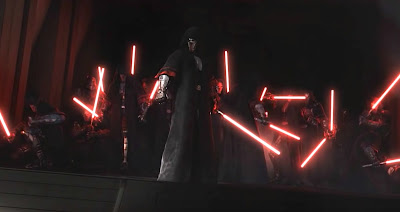 Fast forward to Stargrave being released.  I liked Frostgrave and thought I would give these new rules a shot.  I then saw the plastic figures and immediately though of Star Wars.  they have that "classic" look to them.  I bought the rules, all three box sets and the metal figures.  While I wanted to use these for a Star Wars setting, Stormtroopers are very iconic and there were no close options on the plastic sprues.  That is when I decided to game during the Old Republic.  I can use my figures and still have the Star Wars feel!

I then went onto a buying spree and bought some alien figures from the Wizard of the Coast line, some of them did grow on me.  I also bought some sprues from Into the Maelstrom, these with provide me with some more aliens and also some rebels/planetary troops.  I also bought some Algoryn troops from Beyond the Gates of Antares.

Wow, that is a lot of words, now onto the pictures!

I of course assembled the Sith first :) 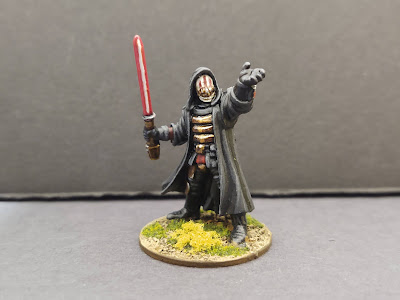 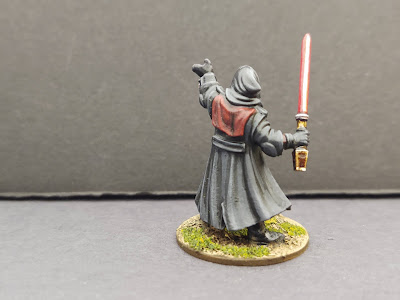 I tried to go for a Darth Nihilus look for his mask.  Something to strike fear into his enemies.  I just drilled out the right hand of a Stargrave miniature and put in a lightsaber that I built.  I like that he looks like he is force choking someone. 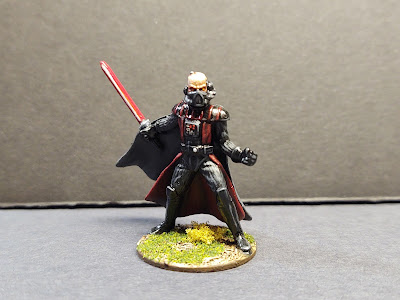 This was a bendy plastic Darth Vader figure that I bought off of Ebay.  I don't know the manufacturer but he stands a little bit taller than the plastic Stargrave figures.  I replaced the lightsaber blade and head.  The head is a GW space marine that I drastically shaved the neck down so it would fit. 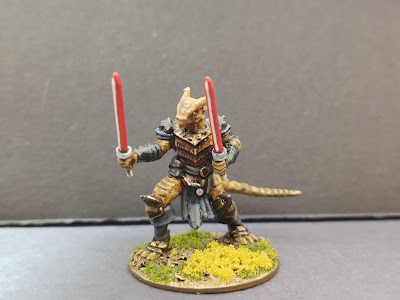 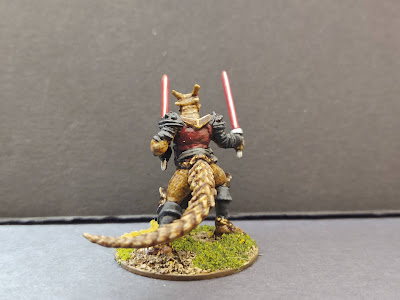 This was a Reaper Bones figure that I got in a KS.  I was never going to paint him until he fell out of a bag that I was moving while looking for Star Wars figures.  I cut off the weapons and added lightsabers. I tried to go for bone/antler handles,  I'm not sure they came across as that. 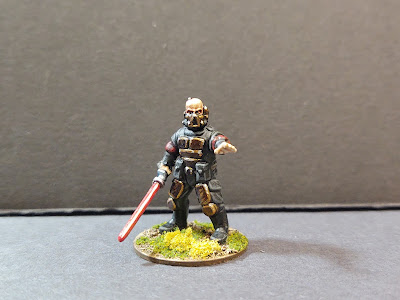 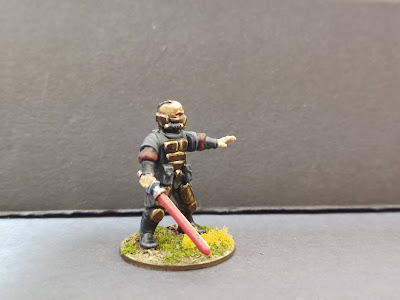 This is a plastic Stargrave body with Frostgrave wizard arms, scratch built lightsaber, and a GW space marine head.  I like the way he is force pushing someone. 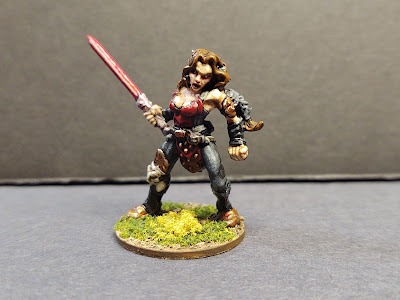 This is another Reaper Miniature.  I removed the axe she was holding and added a lightsaber. 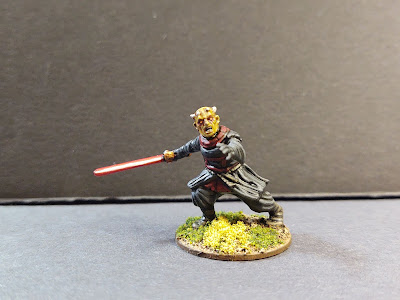 Here is a Frostgrave Cultist  with a GW Chaos space marine head.  Defiantly giving off a Darth Maul vibe. I resisted the urge to give him a double bladed lightsaber.  I saw someone do something similar on the web and that was the inspiration for this figure. 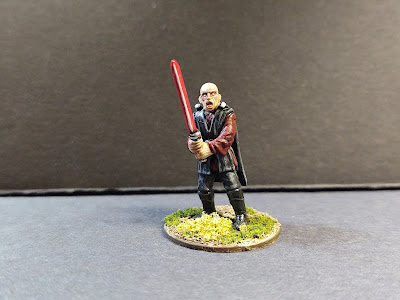 This is a Wizard of the Coast bendy figure with a Perry Mahdist head and a cloak added. 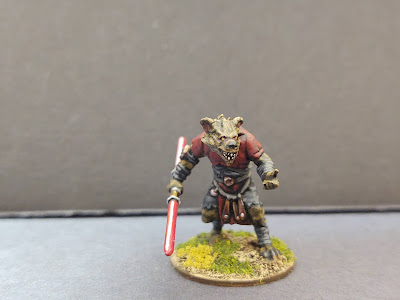 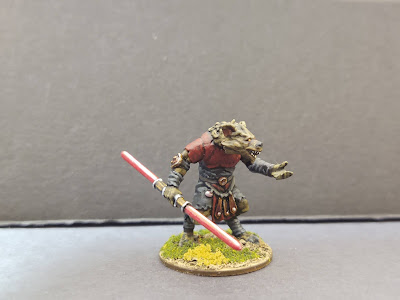 This is a Frostgrave Gnoll with a scratch built double lightsaber, just had to have one :)  I like the way he looks like he is taunting his next victim. 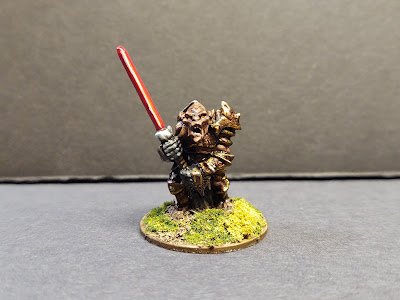 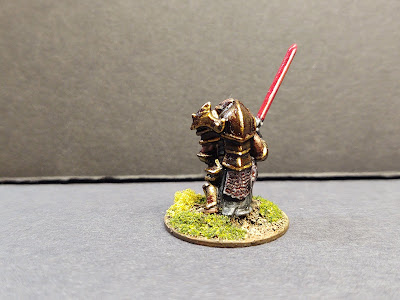 This was originally a Reaper Miniature goblin.  I was a little hesitant about him being covered in armor plates, but I justified it as ancient Sith armor. 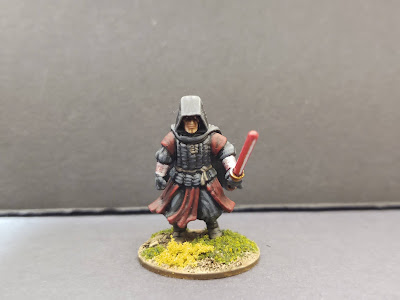 This Sith warrior is made up of a Frostgrave Cultist body, wizard arms, a GW space marine head, and a cloak from Wargames Atlantic...I think.  I'm really happy with his eyes glowing in the shadow of his hood. 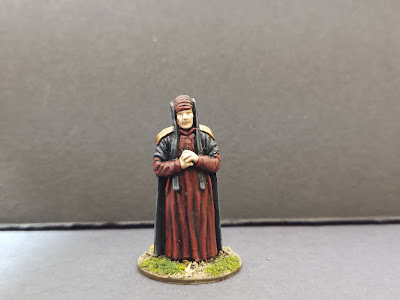 Finally, here is another Wizard f the Coast figure.  He will be an ambassador that  needs protecting in games.
I have already build some Sith troops, a few Jedi, and some bounty hunters.  Just now need to find some more time to paint! Hope you enjoy my long winded post :)